We Survived – Some Boats Didn’t…..

Vento Solare entered the final JYC summer series race with a third place standing.  Weather at the start had winds 8-12 out of the West. It looked like a beautiful night for the race with the potential for some thunderstorms later in the evening.  The crew consisted of Roland on the bow, Eric at mast & tactician, Gardner trimming jib & spin, Mary doing pit & trim, Andrew on main, and Bill on helm.

The West wind required a downwind start since we can’t sail into the land on Jamestown. The course had us sailing across the bay to the Newport harbor entrance buoy G1, back to the R12 buoy off Rose Island, over to the R2 buoy just inside Fort Adams, then to the Jamestown harbor finish line. Vento Solare with its PHRF rating of 75 is the “slowest” boat in the spinnaker A class. All went well, and we were in front of two boats that owed us time after rounding the final mark by Fort Adams on the final leg headed to Jamestown.  Over Jamestown we could see many lightning strikes from dark clouds.  About half way across the bay, sheets of rain were falling and quickly overtook us.  Within 20 seconds of the rain hitting us, the winds rapidly increased to greater than 50 kts. 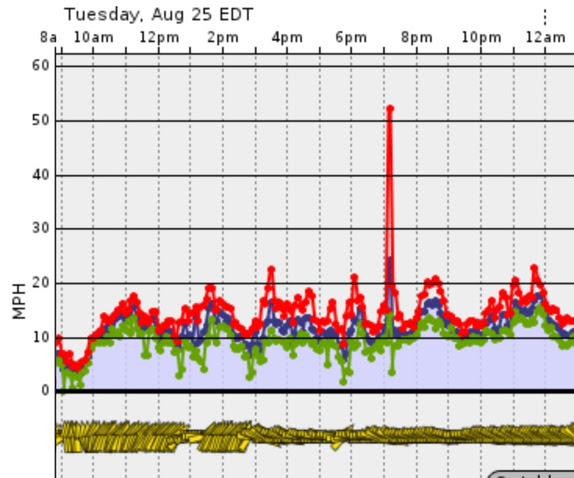 We immediately attempted to drop the sails but were overtaken by the strong winds and knocked over with the port side spreaders in the water.  Mary was at the port winch and slid under the port lifeline, holding on to anything she could to stay with the boat.   Bill was on the starboard side holding on to the helm to prevent from falling off the boat.  Others held on to anything they could to stay on the boat.  While the boat was on its side, it was very difficult to take actions to get the sails down.

Mary was able to pull herself back on the boat through the lifelines. While she was doing that, the man overboard “Jon Buoy” deployed. Within a minute, we were able to drop the mainsail, but not before it shredded along the leech.  The jib was furled and the engine started. 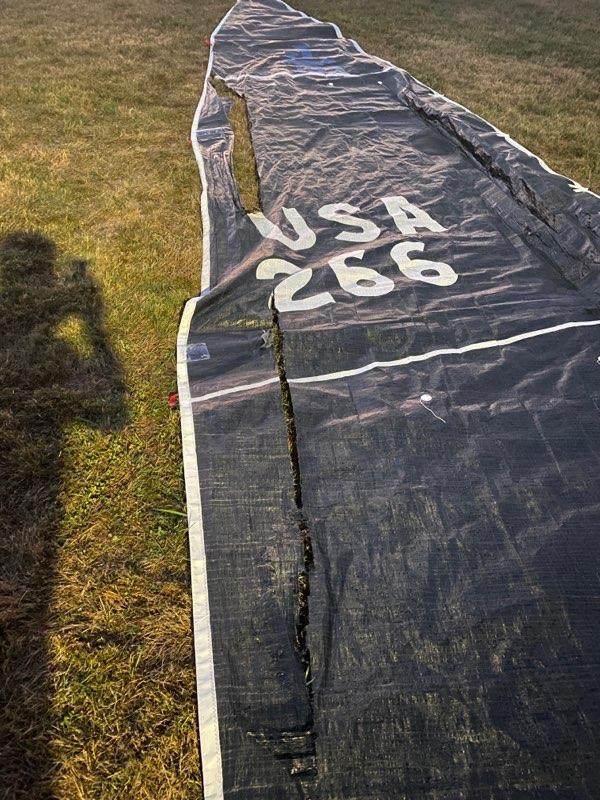 Mainsail Shredded Along the Leech

Around us we saw three other boats with shredded sails. Over the radio we heard calls for help from boats that lost people overboard.  We relayed radio calls to the Jamestown YC race committee who was trying to account for all competitors. A J/22 had 3 of 4 crew members overboard. Fortunately they were all recovered safely.  The Alerion 28 Havsflickan was unaccounted for. Later it was reported as sunk, with the crew safely rescued.  A classic Herreshoff S boat met the same fate, with crew safely recovered. We heard reports from Newport harbor of many boats that swamped on their moorings and sunk.

We attempted to hail J/92s Spirit on the radio but heard no reply. Others responded that they had seen Spirit heading back to the marina.  When we returned, there was no sign of Spirit so we hailed others on the VHF to be on the lookout for them.  Well after we returned to the dock, Spirit appeared at the marina.  It turns out that EC Helme had fallen on the VHF remote and broken the connector, making their radio inoperative.  Once they were at the dock, we reported that they were back safe and all accounted for.

In the end, all in the JYC summer series race were accounted for.  The race was officially abandoned and final results remained with Vento Solare in third place for the Spinnaker A class.  Our instruments showed winds in excess of 50 kts during the storm. The resulting damage is a destroyed mainsail, destroyed jib and man overboard buoy requiring servicing, but everyone is safe.

Edits after publishing: We were on our side and saw more than 90 degrees heel as evidenced by some items stored outboard the Nav station cubby that ended on the shelf above the port settee along with the computer mouse that was in a foam holder velcroed to the Nav table.  The keyboard is kept inside the Nav table when underway. Other than that, everything below decks remained where it was supposed to be. All electronics including the Surface Pro 4 computer on a RAM mount running Expedition continued to function.  Later today I will go back and pull the data to see if I can get the actual wind velocity and heel angle.  We had plenty of rain water spray in the companionway hatch but no sea water entered the boat, even though we had lines streaming through the aft facing port lights.  This could have been a real disaster for us if there wasn’t enough buoyancy to keep those above the water. I’ve always felt confident that the J/Boats I’ve owned can survive challenging conditions – both my previous boat J/30 Rhapsody and now J/109 Vento Solare. 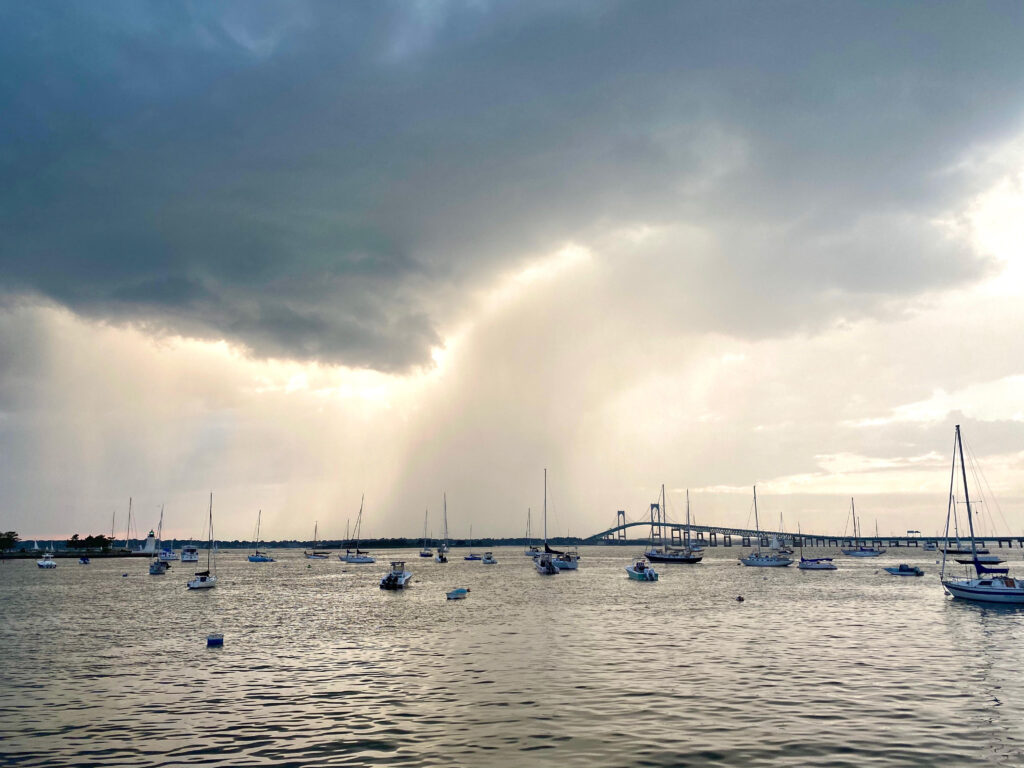 Photo courtesy of Bill Doyle from his Newport dock at 7:04pm. Not a typical t-storm formation for the South Bay. 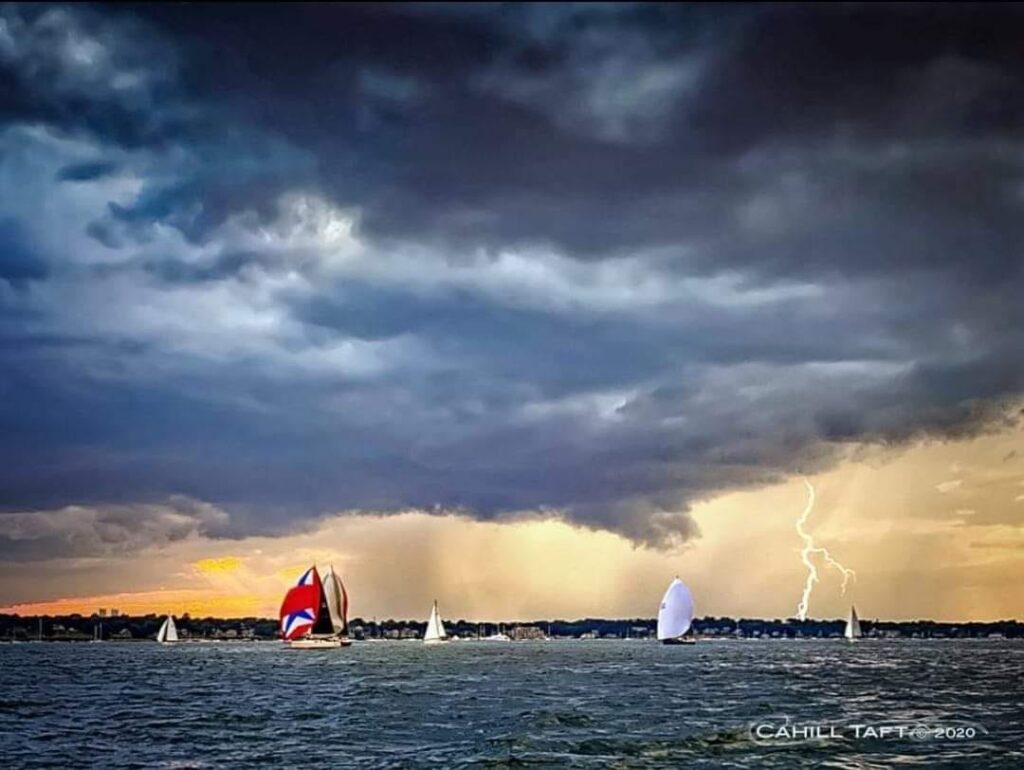 An excellent tutorial about thunderstorm formation with specifics about this storm is provided by Mark Thornton – LakeErieWX at this link.

Permanent link to this article: https://vs.j109.org/we-survived-some-boats-didnt/

Those needing a ride on base please meet 7:45 am at the Pass & ID parking lot to be driven on base.

Everyone please bring your own lunch and any snacks for the day. Please bring a refillable water bottle.  I will have water jugs to refill them.

Those needing a ride on base please meet 5:00 pm at the Pass & ID parking lot to be driven on base.

Those needing a ride on base please meet 5:00 pm at the Pass & ID parking lot to be driven on base.

Pursuit race to BI - non spinnaker.  PHRF 96 (class jib) Be at dock 9am to load up.
Staying at Payne's Dock

Those needing base access please meet 7:45 am at the Pass & ID parking lot so he can drive his car on base.

Bill -  Bringing yogurt, coffee & hard boiled eggs for breakfast Sunday & Monday
TBD - Bringing lunch of Saturday and some munchies for snacks, responsible for Bloody Mary Contest!
TBD - Bringing one dinner to have on boat, the other will be in town. Also bringing lunch for Monday
All - bring your desired cold beverages.  There is complimentary Narragansett Beer available on the dock.

All those staying on boat - bring sleeping bag, towel and quarters for showers at Payne's Dock.

Bill brings fender board, long dock lines, shore power cable, cocktail table and boom tent. Since only 3 people I will not bring V-Berth cushions. The heater/AC will be on the boat.