We Survived – Some Boats Didn’t….. 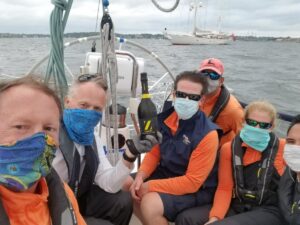 Crew – Eric, Gardner, Andrew, Bill, Mary & Roland with the traditional bottle of bubbly after the finish

Vento Solare placed 3rd in the Aloha Class (PHRF 55+) with an elapsed time of 5:07:40 (corrected time 5:19:58) using the J/109 One Design PHRF 75 rating. The 2020 Ida Lewis Distance Race was a little different this year. Covid-19 precautions had the organizing committee provide a format with a 33 nm course around Conanicut & Prudence Islands which allowed all but the IRC and Doublehanded boats to start and finish the same day.  Conditions were “sporty” with winds from the Northeast in the teens gusting to mid and high twenties.  Chop upwind meant that crew got an occasional salt water shower.

Our strategy was simple – sail our own race away from other boats, do transitions methodically with ample time to execute, and constantly change trim to optimize for the ever changing conditions. The strategy paid off to reach the podium.  Unfortunately our strategy against the 1st & 2nd place boats didn’t work.  The first place boat was Zingara, a classic 45ft wooden yawl with a PHRF rating of 127.  We saw them at the start and pulled away from them the entire race.   They finished 16 minutes 19 seconds behind us, and corrected to 8 minutes 53 seconds in front of us.  The second place boat was Tim Grimes in his Melges 24 Zephyros with a PHRF rating of 99.  It was fun to watch them zip by us while they planed downwind since the boat is so light.  Tim and the crew didn’t look like they were having fun with the light boat bouncing like a cork and getting beat up slogging against the chop on the west side of the course where we went past them upwind. Zephyros finished 6 minutes 46 seconds behind us and corrected to  5 minutes 4 seconds ahead of us.

Our main competition were friends Tom & Diana Sutton on the “FRB” J/109 Leading Edge. We’ve been trading race finishes during this limited season.  Throughout this race we exchanged positions a few times. On the first leg from the start off Rose Island to R2 off Brenton Reef it was a spinnaker run. We played the east side and they were further west.  Vento Solare was about 4 boat lengths in front of Leading Edge approaching the R2 mark.  We executed a successful letterbox douse in the gusts and chop.  This is a conservative spinnaker takedown that forces the spinnaker to come down in the “mail slot” formed between the mainsail foot and the boom.  It almost guarantees the spinnaker can be retrieved safely under most conditions, but requires that all the lines be rerun.  Leading Edge attempted a traditional takedown which unfortunately resulted in them rounding up and taking additional time to get the spinnaker onboard and recover.

We held our position in front of Leading Edge to the next mark where we transitioned to close hauled upwind off Beavertail light. The leg to the Jamestown bridge awarded those who watched the wind shifts and tacked in sync with them. There were some local wind shifts that each capitalized on.  At the Jamestown bridge, Vento Solare passed through about 8 boat lengths in front of Leading Edge.  Each played different sides of the course.  There was a port-stbd meeting just off Quonset point with Vento Solare on starboard.  Leading Edge was required to duck our stern.  Eric was trimming main and saw Leading Edge attempt to turn down, but nobody was easing their mainsail, thus preventing them from bearing away off the wind.  This could have been a nasty collision and fortunately they missed our transom  by inches.

Continuing upwind toward the Northern part of Prudence Island, Leading Edge played the east side and was able to pull ahead of Vento Solare.  Eric insisted that I go below to get lunch since he knows when I get “hangry” my concentration isn’t as good.  Eric took the helm and I had lunch.  Eric continued to drive for a while as we attempted to  recover our position with Leading Edge 15 boat lengths ahead. A few hundred yards before the turning mark R8 Northwest of Prudence Island, I took the helm again.   Leading Edge had a substantial lead as we rounded the top of Prudence Island and turned on a reach toward mark C1 off Homestead Point, Northeast Prudence Island.   Leading Edge was able to transition to spinnaker before Vento Solare as the course allowed turning further off the wind heading toward the Newport bridge.

Vento Solare was able to make good gains on Leading Edge by staying on the East side of the course and not crossing the adverse flooding current.  Leading Edge crossed the maximum adverse current to sail the west side of the downwind course.  Gusting conditions made it a challenge for the spinnaker trimmers and helmsman to keep the boat pointing deep downwind where gains could be made.  Many boats could be seen rounding up during spinnaker gybes – caused by poor execution and coordination between the crew and helmsman.  Vento Solare did not have a single roundup thanks to the great crew work with Roland on bow, Gardner on mast, Mary & Andrew trimming spinnaker and Eric trimming main.  By the time we reached the Newport Bridge, Vento Solare  regained the lead.  Similar to the first spinnaker douse, we setup to do another letterbox. Once we turned closer to the wind by R12 near Rose Island, it was apparent we would need to douse the spinnaker soon.  The jib was unfurled and the letterbox douse was executed perfectly.  We could see boats behind us rounding up as they delayed their  spinnaker takedowns.

Vento Solare cruised on a reach under jib and main to the finish.  The Ida Lewis finish tender came by after we dropped our sails and we traded our completed race declaration form for the traditional bottle of bubbly. The boat was cleaned up and we motored back to the Navy Marina for a quick celebration and final cleanup with everyone pretty well spent from a long day on the water that started at 10:30am and finished back at the dock 5:30pm. You may replay the RaceQs tracker at this link.

I’d like to thank the crew for their great teamwork and executing during this long race.

*post race update – Corrected results has Tim Grimes in Zephyros awarded the 1st place trophy ahead of Zingara which was listed with the wrong PHRF value. 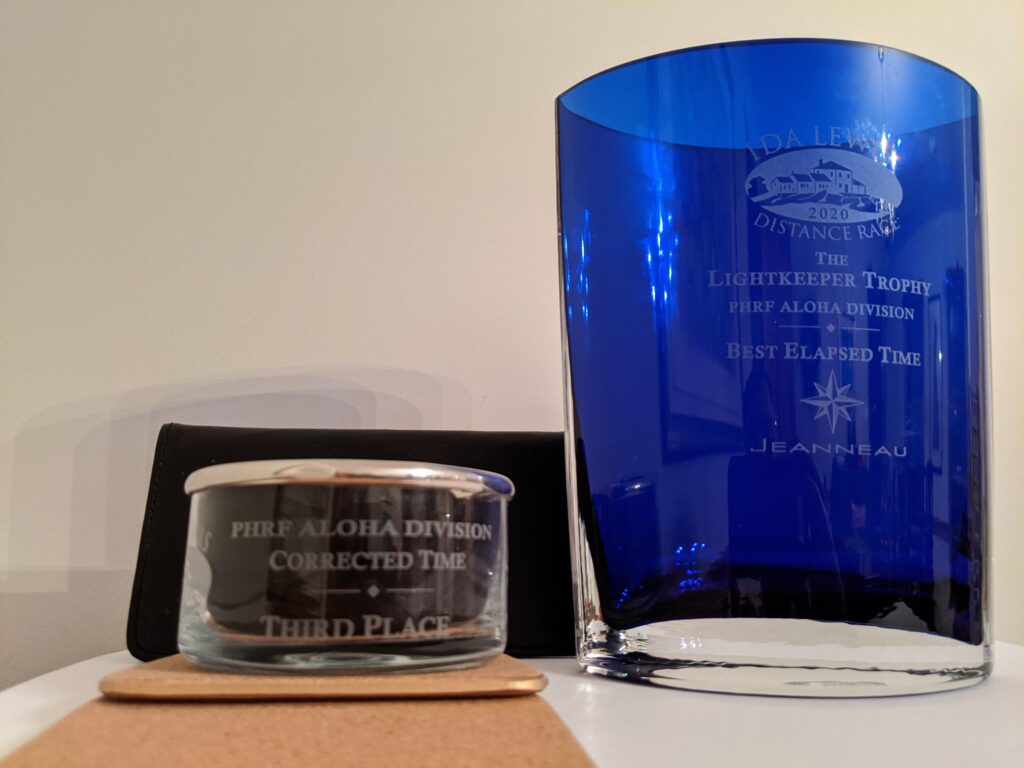 Permanent link to this article: https://vs.j109.org/ida-lewis-distance-race-podium-finish/