There is a great picture of Vento Solare from the 2019 Ida Lewis Distance Race on the lead in to the North Sails News with an article How to Improve Your Tacks.  It is posted below for your reading pleasure.

HOW TO IMPROVE YOUR TACKS

Prioritizing Your Upwind Technique Can Make Or Break Your Race Result 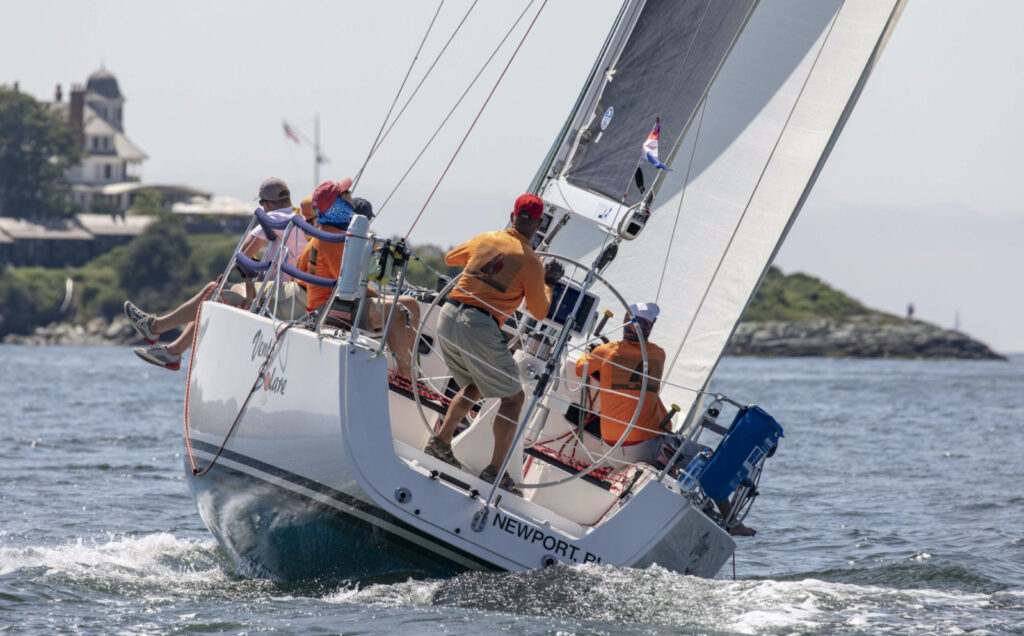 The most important element of upwind boat handling is tacking, though every once in awhile an efficient reef or genoa change could also win you a race. Tacking seems like a minor thing, but the difference between a good tack and a poor one can be measured in boat lengths. In a race where you tack ten times, good tacks can provide the margin of victory. And in a close duel, superior tacks will allow you to break free from, or keep control of, a rival. Each crew plays a role in ensuring a good tack.

The courtesy of a preparatory hail, “Ready about,” increases the likelihood of a good tack at “Hard-a-Lee.”

A proper tack starts with a slow, smooth turn to preserve momentum and allow the boat to coast upwind. As the boat comes head to wind and speed is lost, turn more quickly to finish the tack.

In waves a faster turn is called for, as momentum will be lost more rapidly. Start the turn on the face of one wave and turn quickly as the bow pops out over the crest. Try to get the bow around so the next wave pushes the bow down on the new tack, not back onto the old tack.

During the turn the helmsman must change sides and settle into position to work the boat up to speed. Come out of the tack a few degrees low and squeeze up as speed builds. Try to focus on the gradual push of the tiller as you are flattening the boat.

Keep crew movement to a minimum, and choreograph your tacks to reduce traffic. For example, at “Ready about” it makes little sense to have the genoa trimmer come to windward to tail the new sheet while another crew member moves to leeward to release. The genoa trimmer should handle the release, and crew from the rail should tail and grind. On some boats it works to have the genoa trimmer release the jib, and then turn to take the main. Meanwhile, the main trimmer abandons the main, and trims the jib.

Until you are on the layline you know your next maneuver, sooner or later, will be a tack. Let’s be ready sooner.

As soon as possible after the completion of the previous tack, load the lazy jib sheet on the winch and flake the working jib sheet. At “Ready about,” the trimmer should make sure she is prepared to release and the tailer should check the new winch, take up slack on the lazy sheet, and put the winch handle in place. No one else should move. You slow the boat if you get off the rail at “Ready about,” and you also telegraph your moves, letting your competitors know you are about to tack.

Even at “Hard-a-Lee,” most of the team can sit tight. As the boat stands up, the grinder should move into position. (There is nothing to grind until after the release anyway.) The longer you hike, the faster the boat will be going into the tack.

When the genoa is backed halfway across the foredeck, ease out one arm length before spinning the remaining wraps off the winch. The sheet should be flaked in advance. Make sure it runs. Every boat can roll tack, not just dinghies. In light and moderate winds, a roll tack uses crew weight to help steer the boat and tack the sails. Here’s how: First, heel the boat to leeward to generate weather helm and start the boat turning up into the wind. Next, as the boat passes through irons, roll weight to the old windward/new leeward side. This will help the boat through the second half of the turn and throw the sails across the boat. Finally, as the sails come over, move up to the new windward side. This hikes the boat flat, helping the boat accelerate out of the tack.

Tail the new genoa sheet hard from the moment the old one is released. The tailer should pull in long even strokes across his body. The grinder should grind full speed right from the start, even when there is no load. It is sometimes helpful to have another crew member slap the sail around the rigging and drag the clew aft.

The grinder, by spinning the winch full speed, can help the tailer bring the sail through the tough spots. By keeping the winch drum spinning, he also prevents overrides. This allows all the necessary wraps to be laid on the winch from the start of the tack, which means you don’t have to stop to add wraps once the sail loads up.

Trim out of the Tack

Once the sail is nearly trimmed, the grinder can move to the rail and the tailer can trim the last few inches as the boat accelerates. The trimmer should call out the overall boat speed often so the helmsman knows when the boat is approaching full speed and when he needs to press more.

If time allows, hike immediately after you tack. Do this before you set the pole, or clear halyards, or do any housekeeping. Hike out, settle the boat, and let the driver concentrate. Wait until you are up to full speed before you start moving around. This holds true in light air as well. Even when hiking weight is not needed, movement robs speed and disrupts concentration. Permanent link to this article: https://vs.j109.org/vento-solare-featured-in-north-sail-news/